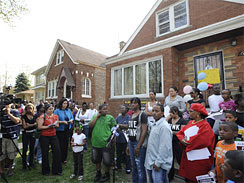 While Sheriff Tom Dart was out suing Craigslist and rounding up hookers and Johns, violence ran so out of control in Chicago that they're thinking of calling in the National Guard. A toddler shot while sitting in a car with her two sisters, 113 people killed since January 1st, and gang and gun violence at an all-time high and Dart is out running stings against consenting adults. He's not out getting streetwalkers off the roads. He's busy putting undercover female officers on Craigslist posing as prostitutes and sending undercover male officers to the doors of escorts. I suppose non-violent, victimless crime takes precedence over murders for a good reason. I think everyone should send Dart a letter asking him why, because I cannot come up with a good reason. Ask him if it's because 80% of the victims are African-American. Perhaps, he values black lives less than the titillation of catching consenting adults enjoying the world's oldest profession. God forbid the Cook County Sheriff's office assist in curbing gun crime in Chicago. Instead, just call in the National Guard. Yes, I am *rolling on the floor, laughing my fat ass off*, not because of the tragic death of 113 people, but because Dart has screwed up priorities aimed at him eventually being elected to a higher office and no one holds him accountable.
Posted by Cadence Johnson-Ryder at 1:09 PM No comments: